The meeting was attended by over 50 representatives of departments, large French companies and banks, as well as heads of relevant ministries, departments, industry associations and commercial banks from the Uzbek side.

The agenda of the event covered a wide range of issues of trade, economic and investment cooperation in industry, energy, agriculture, housing and communal services, tourism, transport and other areas.

The head of the French delegation gave a high assessment to the dynamics and effectiveness of the systemic reforms being carried out in Uzbekistan in various sectors of the economy, and also voiced readiness to further expand economic ties with Uzbekistan, as with one of the key partners of France in Central Asia.

During the event, it was noted that the visit of the President of the Republic of Uzbekistan to France in October 2018 served as the basis for the transition to a fundamentally new level of Uzbek-French partnership, and the agreements reached during the visit are being successfully implemented thanks to the close and coordinated interaction of the relevant ministries and departments of the two countries.

The key topic of the meeting was measures to further expand investment cooperation. It was announced that today 44 enterprises with the participation of French capital operate in the Republic of Uzbekistan, the areas of activity of which are construction, tourism, agriculture and the provision of services. In particular, the positive results achieved in the implementation of joint projects with such large French companies as Airbus, Total Eren, Eiffage, Thales, Vinci, Rungis, Orano, Suez, Leroy Merlin, Sanofi, Fives, as well as banks Natixis, Credit Agricole and Bpifrance.

They also identified a significant potential for deepening investment cooperation in the fields of alternative energy, geological exploration, infrastructure development, agriculture, transport and logistics, tourism and the banking and financial sector. The possibilities for attracting French companies to participate in the program of privatization of state assets in Uzbekistan were discussed separately.

During the meeting, it was agreed that the parties will continue to work to increase trade by establishing closer cooperation between the relevant ministries and departments of the two countries in order to implement joint practical measures to eliminate existing barriers in mutual trade, as well as establish direct ties between manufacturers of the two countries. Further steps were also outlined to attract direct French investments and technologies in the framework of the implementation of new promising projects in various sectors of the economy of Uzbekistan.

The participants of the meeting had the opportunity to voice proposals for the development of further partnerships and present presentations of specific projects in such areas as energy, production of building materials, chemical industry, pharmaceuticals and other industries.

As a result of the meeting, a "Roadmap" on bilateral economic cooperation for 2021-2030 was signed between the Ministry of Investment and Foreign Trade of the Republic of Uzbekistan and the Ministry of Foreign Trade and Economic Attractiveness of the French Republic, the Program of Cooperation with the French Development Agency for 2021-2025, financial protocol on financing the project for the creation of an international all-season resort "Beldersay - Chimgan - Nanay", financial protocol on financing the project for the modernization and management of the water supply system in Tashkent, implemented by the company "Suez", financial agreement for the construction of the company "Total Eren" in conjunction with the European Bank reconstruction and development, the European Investment Bank and the division of the French Development Agency "Proparco" of a photovoltaic station in the Samarkand region, as well as a number of bilateral documents on cooperation between relevant ministries and departments of Uzbekistan and by French companies. 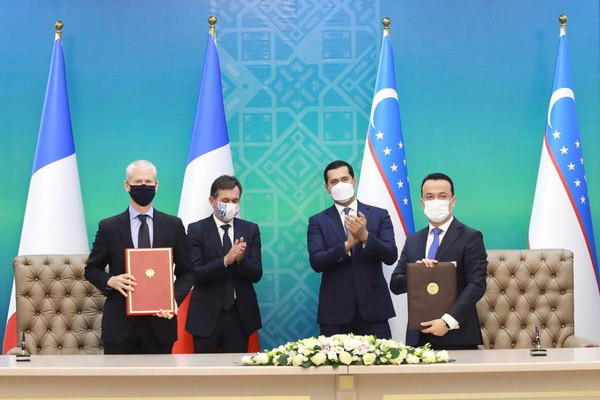