Small business and private entrepreneurship is one of the points of economic growth, an important source of employment for the population. Therefore, special attention is paid to the development of this sphere in our country. All necessary conditions have been created by decrees and resolutions of the head of state. Now it is important for khokims and sector leaders to competently organize work, take measures to open and support continuous production, increase the volume of products and the number of jobs.

In accordance with the decree of the President of the Republic of Uzbekistan from 1 May 2020, a rating system for assessing the socio-economic development of regions was introduced. Accordingly, for the first time, economic indicators, business support environment, infrastructure and the level of use of available resources in districts and cities were studied. Based on the analysis results, territorial units were assigned the categories “good”, “average” and “unsatisfactory” based on the state of entrepreneurship development. Thus, the situation was recognized as "good" in 48, "average" in 119 and "unsatisfactory" in 33 districts and cities.

At the video conference, measures were discussed to solve problems on the ground, taking into account the indicated results of the analysis and to provide assistance to areas with low indicators.

It was noted that the ministries and departments included in the economic complex should turn into organizations “serving entrepreneurs”. The importance of using the potential of districts and cities with an "unsatisfactory" situation, popularizing the experience of territories of a "good" category was emphasized.

For example, in Samarkand region, the volume of industrial production amounted to 1.1 trillion soums, or 4.5 million soums per capita. This is the highest figure in the region. In addition, 508 business entities were created, 71 percent of new jobs fell on small businesses. Local budget revenues have doubled over the past three years.

Over the same period of time, 802 new business entities were created in Kamashi district, and 132 inactive enterprises were restored. Compared to last year, exports increased 1.5 times.

The share of small business in the regional domestic product of Bekabad district is one of the smallest in the country. It produces 10 thousand tons of cotton and 100 thousand tons of grain per year, but they are not processed.

It is indicated that khokims of districts and cities and their deputies, who have achieved approximate indicators, will be assigned a 30% salary increase, and penalties will be applied to the heads of territories with an unsatisfactory situation.

“A leader who does nothing to improve people’s lives will not work even a day,” the President stressed.

It was determined that in the districts and cities with an assessment of "unsatisfactory" and "average", the system of anti-crisis management will be introduced. Anyone who has expressed a desire to govern the territory can present his program for the development of a district or city in the local councils of people’s deputies. Applicants who have defended their programs before the people’s representatives will be appointed khokims with the right to lead their team.

- Khokims must be elected by the people. We will definitely come to this, - said Shavkat Mirziyoyev.

For eight months of this year, more than 60 thousand small businesses were launched. Each of them provides an average of 38 million soums in tax revenues and creates at least 2 jobs. But more than 31 thousand enterprises have not yet restored their activity. There are also many people who want to start their own business.

The leadership of the Chamber of Commerce and Industry and the Business Ombudsman were advised to on-site solve problems that hinder the establishment of entrepreneurship, especially to help young people and women in the implementation of their initiatives.

The President gave instructions to finance business projects of families included in the "iron notebook", to launch projects that received funds from banks, but suspended their activities due to lack of raw materials, energy resources or due to logistics problems.

It was noted that it is important for commercial banks to offer entrepreneurs a “package of preferential services” depending on the results of their activities.

As you know, tax revenues from small businesses and local resource taxes are left in full at the disposal of the regions. Consequently, budgetary stability and the development of regions in general are directly related to entrepreneurial activity.

For example, in Kanimekh district, tax revenues to the local budget for 8 months of this year increased by 141 percent compared to the same period last year. A tax break for 20 businesses that faced financial hardship during the pandemic saved 100 jobs.

The State Tax Committee has been instructed to organize similar work in all regions and to strengthen local budgets.

The meeting discussed measures to ensure additional revenues to minimize the expected budget deficit by the end of the year. The need for a thorough study of the tax potential of the regions, identification of sources of additional revenues, an increase in the income of budgetary organizations from paid services, and the effective use of buildings and structures are indicated.

Over the past 4 years, many small businesses have grown thanks to the opportunities created to grow their businesses. The head of state today stressed the importance of stimulating this trend and creating even more favorable conditions for the enlargement of enterprises.

For this, as noted at the meeting, it is necessary to differentiate the benefits provided to business entities. It is advisable to help enterprises that are able to move into the category of medium-sized businesses through the allocation of earmarked funds from the Entrepreneurship Support Fund, assistance in product certification, partial coverage of the costs of science and innovation, and other measures.

The khokims who spoke at the video conference outlined their plans for the development of entrepreneurship and the use of additional reserves. 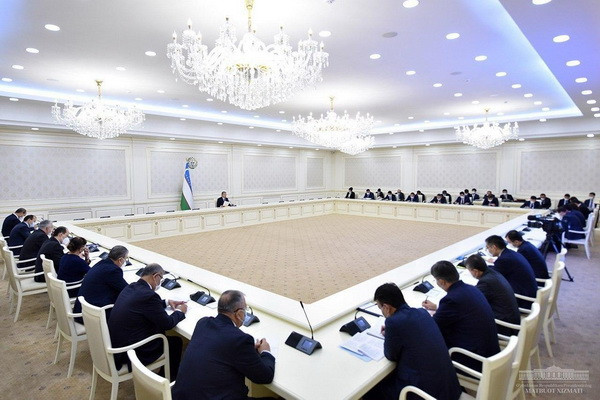