Estimated cost of textile techno-park in Tashkent is US$15m

Tashkent, Uzbekistan (UzDaily.com) -- A preliminary cost of the project on construction of educational-research textile techno-park in Tashkent estimated at US$15 million, director of Korea Institute of Textile Technology Pak Yong Hwang said on 16 December.

He said that the resources will be used to construction and assembly works, purchase and installation of equipment, as well as training of personnel.

The Korean side developed design of high technological three and five floor administration building with office premises, as well as two floor building with basement for experimental production with use of energy saving technologies, equipped with solar batteries. Total area of the park will be over 10,000 square meters.

According to the plan, the educational classes, conference halls, exhibition premises, labs, offices and other objects will be located on the third floor with total area of 4,000 square meters. Experemental-scientific lab at the area of over 1,500 square meters will be located in the second floor, which will be equipped with weaving, knitting, dyeing and finishing, sewing equipment.

It is planned to create hothouse on the roofs of the 5-storey building and a garden with a grassy surface. The building will be constructed with use of modern high-tech, construction and decoration designs. Attached to the building area will be covered with decorative high-strength plates, decorated with green areas and fountains. 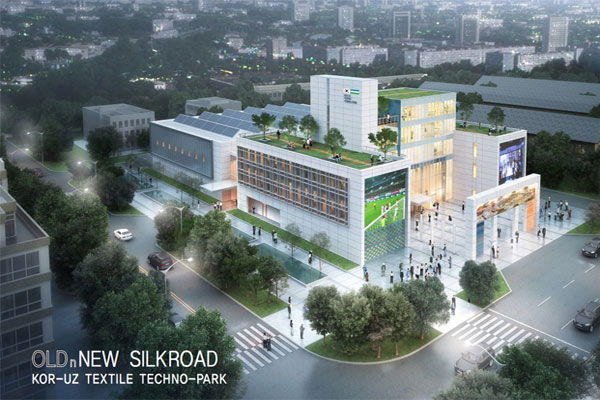