Tashkent, Uzbekistan (UzDaily.com) -- One of the priority tasks of socio-economic development of Uzbekistan is the eliminating all barriers and restrictions before small and private businesses and providing them complete freedom in their development. This principle is reflected in the party election program of the Movement of Entrepreneurs and Businessmen - Liberal Democratic Party of Uzbekistan.

This was discussed at a practical discussion on the topic “Promoting the development of small business and entrepreneurship” which was organized by the Executive Committee of Political Council of UzLiDeP and its faction in the Legislative Chamber of Oliy Majlis of Uzbekistan. It was attended by employees of the Tashkent city prosecutor’s office, representatives of the tax and customs management, Chamber of Commerce and Industry of Uzbekistan, party activists, entrepreneurs, professionals and experts.

During the event the participants discussed the presidential decrees directed to protect private property and develop business activities. In particular, within the last few years alone, more than 15 laws, including those “On the Protection of Private Property and Guarantees of Rights of Property Owners”, “On Licensing Procedures in Entrepreneurship”, “On Family Business”, “On Guarantees of the Freedom of Entrepreneurship” in new edition have been adopted and as a result, the share of small business and private entrepreneurship in the gross domestic product has risen from 31 percent in 2000 to 56 percent today, and more than 77 percent of the overall employed population work in this sphere.

The factor lying behind this success has been the far-sighted policy of our country’s President, aimed at galvanizing comprehensive support for small business and private entrepreneurship, granting them more freedom, eliminating bureaucratic barriers and obstacles to the development of private property and private enterprise.

The participants noted that UzLiDeP should explain in detail the norms of the document among the population, namely, the registration procedure and operation of business have been simplified as well as due to the liberalization of administrative and criminal law this document provides greater freedom for business.

All of these measures are reflected in the Law of the Republic of Uzbekistan “On introducing amendments and addenda to some legislative acts of the Republic of Uzbekistan, aimed at bolstering the reliable protection of private property and entrepreneurship entities, removing barriers for their rapid development”. In accordance with it, amendments and addenda were introduced to more than 40 normative acts pertaining to almost all aspects of business activities.

It should be noted that this document meets the program objectives of UzLiDeP and the interests of its electorate to deepen market reforms, liberalization and competitiveness of the economy, the rule of law, and further liberalization of the judicial system.

At the end of the event the participants underlined that all party activists, MPs of UzLiDeP faction should widely explain this decree among the population, because implementation of the act will help to improve business environment in Uzbekistan, increase local and foreign investments, creation of new jobs, which would contribute to the welfare of the population. 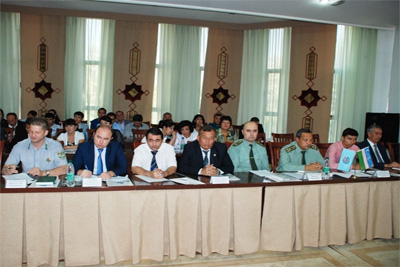 Tashkent, Uzbekistan (UzDaily.com) -- Uztekstilprom Association, with the assistance of the Embassy of Ukraine in Tashkent, hosted negotiations with a business delegation from the industrial city of Khmelnitsky (Ukraine), headed by a representative of the local Administration, as well as among the heads of textile companies in the city. The meeting was also attended by representatives of domestic textile companies interested in establishing close partnerships with potential partners from Ukraine.