Shavkat Mirziyoyev calls to fill “One Belt, One Way” initiative with concrete projects

Tashkent, Uzbekistan (UzDaily.com) -- Concept of the project “One Belt, One Way” should be filled with concrete programmes and projects on regional development, President of Uzbekistan Shavkat Mirziyoyev said.

Shavkat Mirziyoyev noted that the key issue is also development of a comprehensive action program for cooperation in the creation of transport and logistics routes, linking Central Asia through China and Russia to the markets of South and South-East Asia and European countries.

The railway “China-Kyrgyzstan-Uzbekistan-Afghanistan” with access to the ports of Pakistan and Iran in the Indian Ocean could be integrated into an extensive network of transport corridors of “One belt, one way” initative, the President said.

In opinion of the President of Uzbekistan, there is also need to direct efforts to implement joint projects in the sphere of high technologies. Shavkat Mirziyoyev offered to create integrated industrial technical parks, scientific-innovative cluster and free economic zones on “Economic belt of Silk Road”.

“We propose to jointly develop effective mechanisms for promotion of such projects,” the President said.

President of Uzbekistan said that for the effective implementation of the initiative “Economic belt of the Silk Road”, it is necessary to encourage direct dialogue between business communities, especially at the interregional level, with the aim of adopting specific programs and cooperation projects, which fit into the concept of “One belt, One way”.

Mirziyoyev underlined that implementation of the initiatives of “Economic belt of the Silk Road” should be aimed not only at encouraging economic cooperation, but also “strengthening our cultural and humanitarian ties”.

Uzbek President said that historic and cultural cities such as Samarkand, Bukhara and Khiva are located on the route of Great Silk Road.

Shavkat Mirziyoyev expressed confidence that the initiative of President of China Xi Jinping on holding an international forum will allow to form “a permanently functioning dialogue platform for the purpose of exchanging views and practical interaction within the framework “One Belt, One Way”.

“I am confident that implementation of this large-scale project, now covering more than 60% of the world’s population, will contribute to the formation of a single zone of peace and well-being, prosperity and progress, cooperation and friendship between our countries and peoples,” Shavkat Mirziyoyev said. 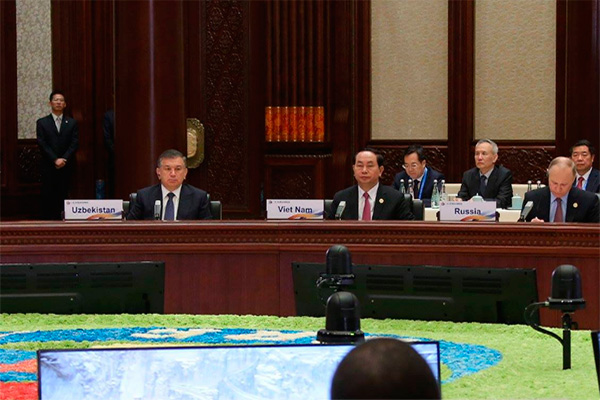