Tashkent, Uzbekistan (UzDaily.com) -- Uzbekistan is not ready to consider a proposal on creation of free trade zone within the Shanghai Cooperation Organization (SCO), First Deputy Prime Minister and Finance Minister of Uzbekistan Rustam Azimov said at the session of the Council of the heads of the governments of the SCO in Zhengzhou (China).

Azimov said that Uzbekistan is for further development of trade-economic relations, expansion of mutual supply of industrial products, demanded in the SCO markets, form favourable conditions for stimulating mutual trade and realization of other measures in the sphere.

He said that in this connection, Uzbekistan pays great attention to ensuring efficient implementation of the programme on interaction of the customs bodies of the SCO for 2016-2021.

At the same time, he added that in the context of announced statements he wants to note that Uzbekistan is not ready to consideration of proposal on discussing creation of free trade zone within the SCO. He said that this direction was not included to the SCO Development Strategy till 2025, which was approved by the SCO leaders at Ufa summit in July 2015.

He said that Uzbekistan counts for cardinal development of the investment cooperation within the SCO, realization of mutual beneficial projects and programmes in priority industries and directions of cooperation, first of all, in high technologic spheres. He said that Uzbekistan has great potential in this direction, which is used in small extent.

Rustam Azimov underlined that potentials of the Business Council and Inter-banking union of the SCO should be used fully. He said that these structures should be attracted to realization of the concrete investment projects within the organization.

The Uzbek official said that the SCO should consider development of transport communication, cardinal expansion of transit potential of the countries of the region as a strategic direction of cooperation.

He said that the SCO member states should consider implementation of projects on developing efficient transport and transit corridors, formation of favourable conditions to increase the volume of cargo transportation, expansion of railway and automobile roads, air communication, creation of corresponding infrastructure, which will help to transform the region into important global transit transport-logistic center.

He said that the projects on transport communication and infrastructure should be realized based on the principles of economic feasibility and validity of the highest consideration and the common interests of countries in the region.

Azimov underlined Uzbekistan supports more active economic, investment and cultural-humanitarian cooperation with the SCO observer states and partners, strengthening interaction and attraction of their huge economic potential into joint activities within the SCO.

He said that Uzbekistan, which chairs the SCO now, wants firmly adhere to principles of succession and gradual development of multipronged cooperation, meeting interest of all member states of the organization.

In this connection, the Uzbek side pays great attention to adherence to principle of consensus within the SCO. 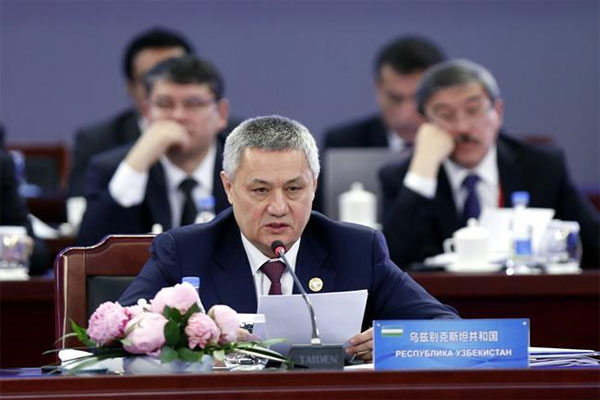 Tashkent, Uzbekistan (UzDaily.com) -- In 2021, 20 companies will provide 47.3% of revenues to the state budget. This is reported by the Ministry of Finance of Uzbekistan in the draft publication "Budget for Citizens 2021".

The course of execution of the President’s orders was considered

Tashkent, Uzbekistan (UzDaily.com) -- On 26 November, chaired by President of Uzbekistan Shavkat Mirziyoyev, a video conference was held on the socio-economic development of Kashkadarya region and improving the life of the region’s population.