The course of execution of the President’s orders was considered

Tashkent, Uzbekistan (UzDaily.com) -- On 26 November, chaired by President of Uzbekistan Shavkat Mirziyoyev, a video conference was held on the socio-economic development of Kashkadarya region and improving the life of the region’s population.

The head of state defined tasks in this direction during his trip to the region on 12-13 November. To give impetus to the accelerated development of each district and city, heads of ministries and commercial banks were assigned to them, the necessary resources were allocated. 2021 was declared the Year of Entrepreneurship Development in Kashkadarya. The goal is to create 10 thousand new economic entities.

At today’s meeting it was noted that taking into account the "points of growth" of each district and city, it is necessary to develop results-oriented projects in industry, agriculture and services.

For example, by creating intensive orchards and vineyards on 20 thousand hectares in Yakkabag, Kamashin, Chirakchin, Shakhrisabz and Kitab districts, the level of processing of vegetables and fruits in the region can be increased to 25 percent.

It is necessary to place projects and connect them to the infrastructure in 11 small industrial zones that will be created in the city of Shakhrisabz, in Nishan, Dekhkanabad, Yakkabag, Mirishkar, Guzar, Shakhrisabz, Mubarek districts.

In 2021, it is planned to implement 500 new projects worth 650 billion soums in the service sector based on loans from commercial banks.

The head of state stressed the economic and social significance of 1,153 investment projects scheduled for the next two years. It is planned to attract about 1 billion dollars of foreign investment and create 19 thousand new jobs.

Responsible persons were instructed to develop additional projects for areas with a low level of industrial development, effectively use available resources.

Measures to lift families out of poverty included in the "iron notebook" were discussed. The importance of the development of small business and the formation of entrepreneurial skills among youth and women was emphasized.

It was noted at the meeting that it is necessary to create modern greenhouses on 1.2 thousand hectares in Karshi, Kamashinsky and Kasan regions, as well as plantations of pistachios and medicinal plants in Dekhkanabad and other foothill regions.

An instruction was given to speed up the solution of organizational and financial issues.

The course of development of engineering and communication infrastructure, construction and reconstruction of drinking water supply networks, road repair is considered. The importance of construction of 5-storey energy efficient houses for those in need in areas with high demand for housing was emphasized.

At the meeting it was instructed to organize a school with in-depth study of information technologies on the basis of school No. 42 in the city of Karshi, as well as one such school in each of the regional centers.

It was noted that an urgent task is the effective organization of reforms launched in the education and health care systems, especially the support and provision of youth employment.

Deputy Prime Minister Jamshid Kuchkarov was instructed, together with the heads of ministries and departments, commercial banks, to monitor the implementation of the tasks of comprehensive development of Kashkadarya region, assistance to entrepreneurs and poverty reduction in the region.

The Ministry of Investment and Foreign Trade was tasked with conducting a critical analysis of the state of each investment project and effectively solving problems on site.

It was noted that the heads of the sectors will monthly report to the local Kengashes of people’s deputies on the implementation of the tasks.

At the meeting, the khokims of the region and districts of Kashkadarya, heads of industries and sectors presented information on the upcoming work on the implementation of projects. 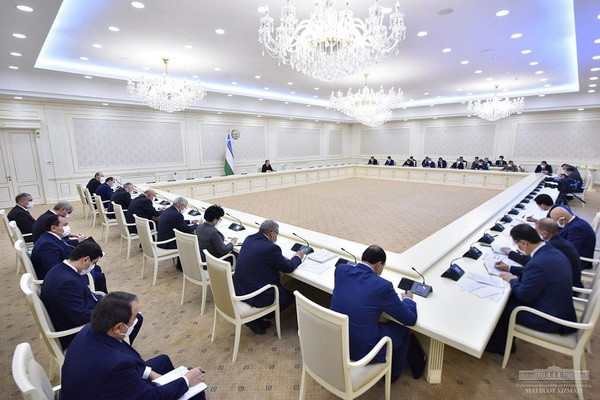 Further steps to reform the energy sector of Uzbekistan discussed

Tashkent, Uzbekistan (UzDaily.com) - On 23 October 2020, a round table was held with the participation of a number of international financial institutions (IFIs) on further reforming the country’s energy sector.

SELENA is interested in the construction of production facilities in Uzbekistan

Tashkent, Uzbekistan (UzDaily.com) - The Embassy of Uzbekistan in Poland has been negotiating for a year and a half with the holding company SELENA on investing in the construction of production facilities in Uzbekistan, Dunyo news agency reported.

Tashkent, Uzbekistan (UzDaily.com) – Next month, the governments of Uzbekistan and the United Kingdom will convene at the 25th anniversary meeting of the Uzbek-British Trade and Industry Council (UBTIC), an influential body that brings together government and commercial leaders.