The President of Uzbekistan receives the delegation of Saudi Arabia

Tashkent, Uzbekistan (UzDaily.com) -- Today, on 25 January, President of the Republic of Uzbekistan Shavkat Mirziyoyev received a delegation of the Kingdom of Saudi Arabia headed by Minister of Investment Khalid al-Falih.

The head of our state emphasized with satisfaction the dynamic development of bilateral cooperation in recent years.

So, despite the pandemic, there is an active dialogue at the level of government agencies and businesses of the two countries. Another evidence of this was the arrival in Uzbekistan as part of the delegation of the Minister of Investments of the heads of about 30 leading Saudi companies.

Investment Minister Khalid al-Falih thanked the President of the Republic of Uzbekistan for the warm welcome, conveyed greetings and best wishes from the King of Saudi Arabia Salman al-Saud and Crown Prince Mohammed al-Saud.

He expressed his sincere gratitude for the support of investment projects of Saudi companies and the created favorable conditions for their productive activities in our country.

The day before, a joint business forum was successfully held in Bukhara, a decision was made to establish a Business Council, and agreements were signed on the implementation of large cooperation projects.

Yesterday, a project was launched to build a new modern thermal power plant with a capacity of 1200 megawatts in Syrdarya region with the participation of the corporation "ACWA Power". In addition, together with this company, wind power plants will be built in Bukhara and Navoi regions with an aggregate capacity of 1000 megawatts.

In general, the number of joint ventures and projects in Uzbekistan with the participation of Saudi investments has increased significantly over several years.

During the talks, specific projects of practical cooperation were discussed.

Agreements were reached on the preparation and implementation of new projects in the energy, oil and gas, gas chemical and chemical industries, the industrial sector, agriculture, healthcare and pharmaceuticals, as well as in other areas, including through the implementation of the principles of public-private partnership.

Particular attention is paid to the development of instruments for financial support of joint programs and projects, including the creation of investment companies and microfinance organizations in Uzbekistan.

It was agreed that a road map will be adopted and implemented to work out and promote these initiatives, the intergovernmental commission will resume its activities, and working groups will be formed on priority projects. 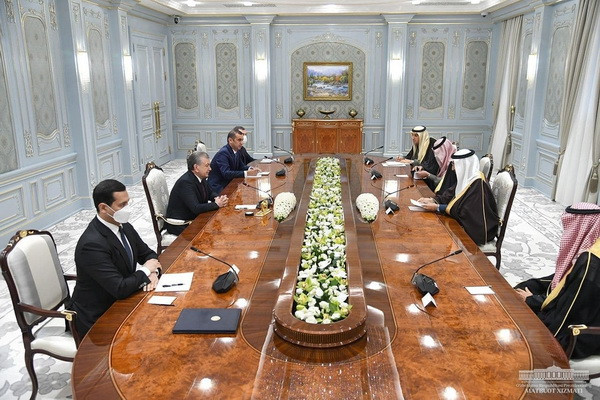