The facility built in 1965, which has come to a worn-out state, was reconstructed and renovated this year. The foundation of the underground storage of books and special rooms was reinforced with concrete. The three-storey building has acquired a modern look and equipment. The library's book collection is more than 872 thousand copies.

The Head of the state became acquainted with conditions created in the center.

“This place should be the center of the spirituality of Andijan region. Our children’s education is an investment in the future. Therefore, it is necessary to attract more young people here, to increase productivity”, Shavkat Mirziyoyev said.

It was noted that it is necessary to allocate funds to replenish the library fund, connect the center with schools and universities, hold competitions on the history of Andijan, the work of such poets as Babur, Chulpan, Muhammad Yusuf.

The Information and Library Center employs 68 people. The President instructed to further encourage them at the expense of the local budget.

President Shavkat Mirziyoyev became familiar with the construction project of the bridge on Babur Street in Andijan.

The structure is planned to be built based on Samarkand's experience using a monolithic method. The bridge will pass over the Central Railway Station and connect the two parts of the city. The length of the bridge will be approximately 700 meters.

Thanks to the construction of the bridge, drivers will not have to overcome an extra 5 kilometers, and the travel time will be reduced by 25 percent.

The Head of the state approved the project and instructed responsible persons to allocate funds.

The President also visited a flower garden in Andijan district.

“This is beauty, income, and aesthetic education”, Shavkat Mirziyoyev said. – It is necessary to organize such gardens in each district, to train women to grow flowers. This will help to provide employment and a source of income for women included in the “women’s notebook”.

Thereupon, the visit of the President of the Republic of Uzbekistan to Andijan region has ended. 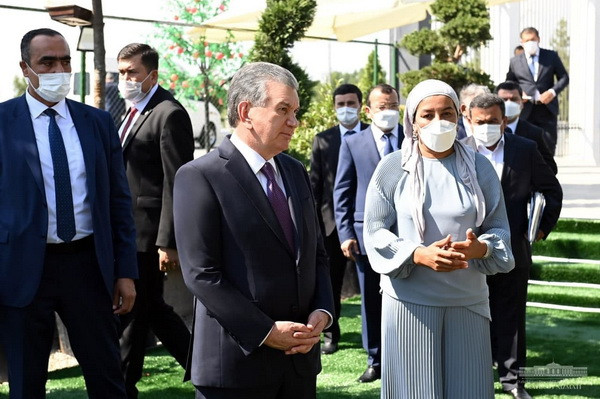