Tashkent, Uzbekistan (UzDaily.com) -- On 8 February 2017, Uzbek-Kuwaiti Business Forum was held in Kuwait city. The governmental delegation of the Republic of Uzbekistan, which is in the State of Kuwait on an official visit, attended the forum, the Uzbek Foreign Ministry said.

The Minister of Foreign Affairs of the Republic of Uzbekistan Abdulaziz Kamilov in his speech at the opening ceremony expressed deep appreciation of the event at the Chamber of Commerce and Industry of Kuwait, which is aimed at jointly identifying promising areas of cooperation between the two countries in trade-economic, financial-investment and other fields.

The Minister paid special attention to the existence of enormous opportunities for further consistent development of the Uzbek-Kuwaiti links and actively using the untapped potential between our states. It was underlined that the trade-economic and financial-investment direction of cooperation are considered as the most priority and perspective ones in bilateral relations with Kuwait.

It was hoped that on the outcomes of the Business Forum business circles of Kuwait would learn more about Uzbekistan, its current social-economic development and priorities for the future, as well as the enormous opportunities for business offered by the Uzbekistan’s economy.

It was noted that today all necessary conditions are created for expansion and deepening of interaction in business area: the close and trustworthy political dialogue between the two countries is established; the necessary treaty and law basis of bilateral cooperation is created; the favorable investment climate for foreign investors is put in place in Uzbekistan.

During his speech the Minister pointed out that several meetings with the leadership of Kuwait, including the conversation of the President of the Republic of Uzbekistan Mr. Shavkat Mirziyoyev with the First Deputy Prime Minister, Minister of Foreign Affairs of Kuwait Sheikh Sabah Al-Khaled Al-Hamad Al-Sabah in Tashkent in October of 2016 demonstrated the political will of the two sides to actively develop and expand the trade-economic and investment cooperation, encourage the businesses of their countries to establish contacts and implement the joint projects.

As underlined during the years of Independence in Uzbekistan we have created the favorable investment climate, introduced the broad system of legal guarantees and preferences for foreign investors and elaborated the system of measures on stimulating the activity of enterprises with foreign investments.

The members of the Board of Directors of the Chamber of Commerce and Industry of Kuwait, representatives of leading Kuwaiti companies, including “KIPCO”, “KAMCO”, Kuwait Investment Company, the Kuwait Investment Agency, the company “Thuwany Trading Company”, the bank “Burgan Bank” and others attended the business forum. 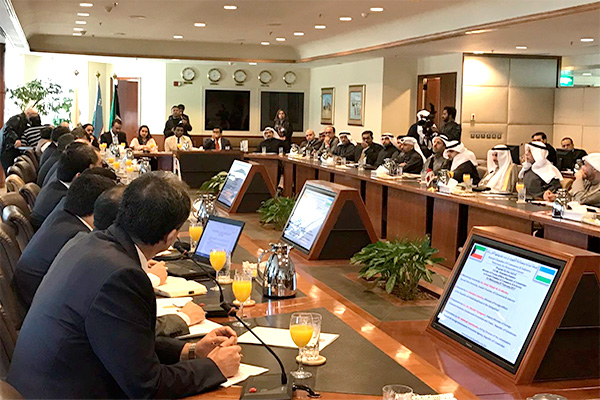