Approximately 50 people participated in the workshop to examine the results of the feasibility study and further discuss the future direction of the project, including Lee Wook-Heon, Ambassador of Korea to Uzbekistan, Im Jeong Hee, Director of KOICA Uzbekistan Office, Botir Zakirov, Deputy Prime Minister of Uzbekistan, and Valery Tyan, Director-General of Uzbekistan Airways.

The project is included in the list of grant aid projects signed by Uzbekistan’s President Islam Karimov and South Korean President Park Geun-hye during Karimov’s visit to South Korea in May 2015. The project, which has received considerable attention from the two countries’ high-level officials, began in earnest in January 2016 and is expected to be completed in July this year. The workshop was held to officially submit the results of the feasibility study to the Government of Uzbekistan prior to the completion of the project.

Deputy Prime Minister Botir Zakirov, through his welcoming speech, expressed gratitude to the Korean Government for supporting this project. Zakirov said the Government of Uzbekistan will take necessary measures to promptly carry out the project through relevant procedures. Furthermore, Zakirov mentioned that the feasibility study report shared at the workshop will serve as a basis for the construction of an airport that meets the international standards.

Through his congratulatory speech, Ambassador Lee Wook-Heon mentioned that the project will mark a new milestone in the two countries’ cooperative relations and that the Korean Government will strongly support Tashkent Airport in becoming a hub of central Asia by sharing Korea’s know-how and experience in airport construction and operation. 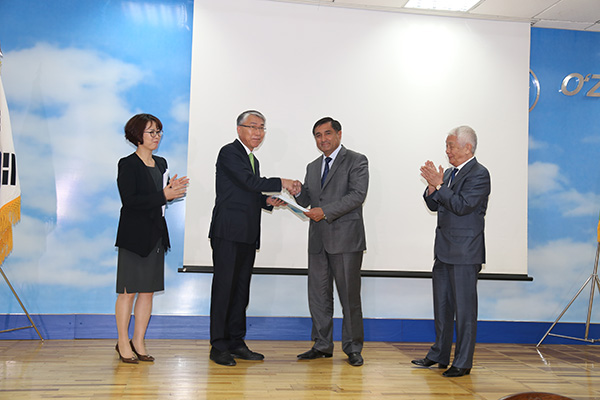