“Friends, we are pleased to announce that AKFA Group has completed all procedures related to obtaining land for the construction of a shelter for homeless animals. We have a large-scale construction work ahead of us, which must be approached with no less responsibility. This stage will take three months,” Kamran Gulamov assured.

As a reminder, AKFA Group announced its intention to build a shelter in early November 2020. A month later, the company presented a project for a shelter.

As it became known, the shelter will be located on the territory of Pskent district of Tashkent region. The holding expressed gratitude to the khokimiyats of the city of Tashkent and Pskent district for assistance in obtaining a land plot for construction.

AKFA Group CEO Kamran Gulamov invited everyone to visit the territory at the final stage of construction and to the opening of the shelter, and also said that the company would inform the public about the progress of the project:

“We will keep you updated on the highlights of the construction process through our official sources and media. We are glad that our initiative has found a response from thousands of caring people and I will gladly invite everyone to the final stage of construction and to the official opening of the shelter, "Kamran Gulamov promised.

The shelter will occupy an area of 1 hectare and will be designed for 1000 dogs. During the development of the project, special attention was paid to the creation of amenities for the four-legged. For example, comfortable walking areas and a separate block for puppies and lactating ones will be built here. In addition, there are premises for staff, administrative and medical blocks, where animals can receive mandatory vaccinations and other assistance. The new shelter also reportedly has disinfection barriers and a strict quarantine zone for newly arrived or sick dogs.

According to the plans of the Holding, the shelter will receive the status of a non-governmental non-profit organization, which will allow it to officially attract assistance from legal entities and individuals. At the same time, AKFA Group will continue to allocate funds for the main expenses of the shelter. 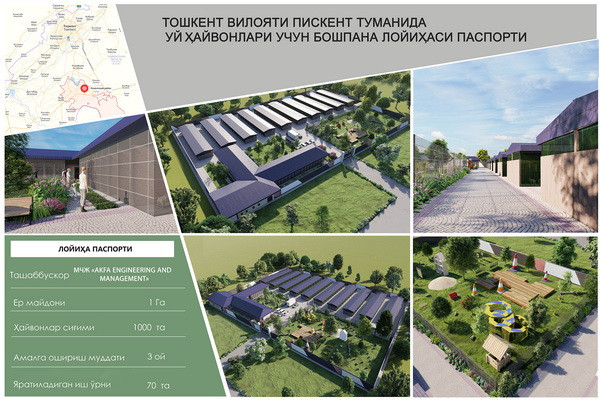 Tashkent, Uzbekistan (UzDaily.com) -- On 21 April 2021, a delegation of the Republic of Uzbekistan led by Minister of Foreign Affairs Abdulaziz Kamilov took part in a virtual ministerial round table held as part of the Leaders’ Summit on Climate.

Tashkent, Uzbekistan (UzDaily.com) -- At the end of January-March 2021, the foreign trade turnover (FTT) of Uzbekistan reached US$7.1 billion, which, compared to the same period in 2020, decreased by US$930.0 million (a decrease of 11.6%), the State Statistics Committee of Uzbekistan said.